Among them are 5 new enterprises, modernization of 3 existing production facilities and construction of a gas pipeline.

The coronavirus pandemic and the current difficult economic situation due to its spread to a small extent affected the lending activities of Development Bank of Kazakhstan (DBK, a subsidiary of the Baiterek Holding). Summing up the results of the year, it was reported by representatives of DBK. According to them, the provision of financial support to large infrastructure and industrial projects is proceeding at active pace. Thus, in the 2020, with the participation of DBK, 9 large investment projects were put into operation, 5 of which are new enterprises, 3 are the modernization of existing production facilities, and the construction of a gas pipeline of KazTransGas Aimak JSC. At the same time, it is reported that to date, all projects have been commissioned and began to function.

Energy projects make up a significant share in DBK's portfolio. This trend has not changed this year; with the participation of the Bank, three projects in this industry have been launched at once. For example, this year the construction of the second start-up complex for 50 MW of the Astana EXPO-2017 wind farm of CAPEC Green Energy LLP in the Akmola region was completed. Its total cost amounted to more than 31 million tenge, 9.8 million tenge of which was provided by Development Bank in the form of a loan. Today, the construction of the enterprise has been fully completed, the launch of the second stage took place in December 2020. By the way, the construction of the first start-up complex of the power plant, which was put into operation in August 2019, was also carried out with the help of DBK. Now the wind farm produces average of about 170 million kWh per year. When the enterprise reaches its design capacity, it will significantly reduce the volume of greenhouse gas emissions and provide energy to about 10 thousand households. In December last year, the construction of a solar power plant "Kaskelen 50 MW" in the Almaty region, implemented by "Mistral Energy" LLP, was also completed. Its cost was 13.56 billion tenge, of which 10.9 billion tenge was provided by Development Bank of Kazakhstan. It is noteworthy that the construction of the power plant is carried out within the framework of the state program "Business Road Map 2025". 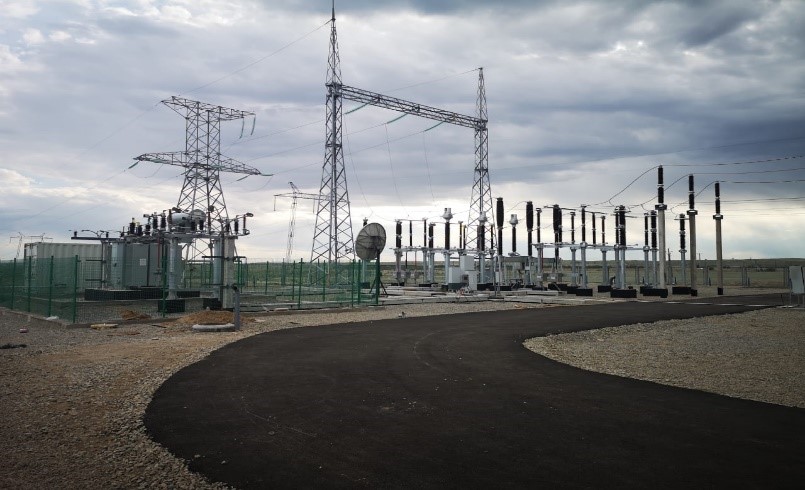 In April of this year, the modernization of power unit No. 5 of the Eurasian Energy Corporation JSC in Pavlodar region was completed, the total cost of which reached 194 billion tenge. At the same time, the amount of the loan from DBK amounted to 150 billion tenge. At the expense of the Bank's borrowed funds, the reconstruction of power station No. 5 and the Vostochnyi coal mine was carried out, these measures allowed to increase the capacity of power unit No. 5 of the Aksu power plant to 325 from 300 MW, as well as to extend the service life of equipment by 30 years, reduce fuel consumption and operational costs, improve the environmental and quality indicators of the power plant.

“he Development Bank pays special attention to projects in the energy sector, in particular, we strive to expand the loan portfolio with“ green ”projects, since in its activities the Bank adheres to the principles of developing high-quality infrastructure, that is, such things as social responsibility, environmental component and sustainability of the project are important for us. DBK has been lending to environmentally friendly production facilities since 2015, and it is very important for us that the partners who worked with us in this area at the first stages are now returning to the Bank with new projects,” said Deputy Chairman of the Management Board Duman Aubakirov. 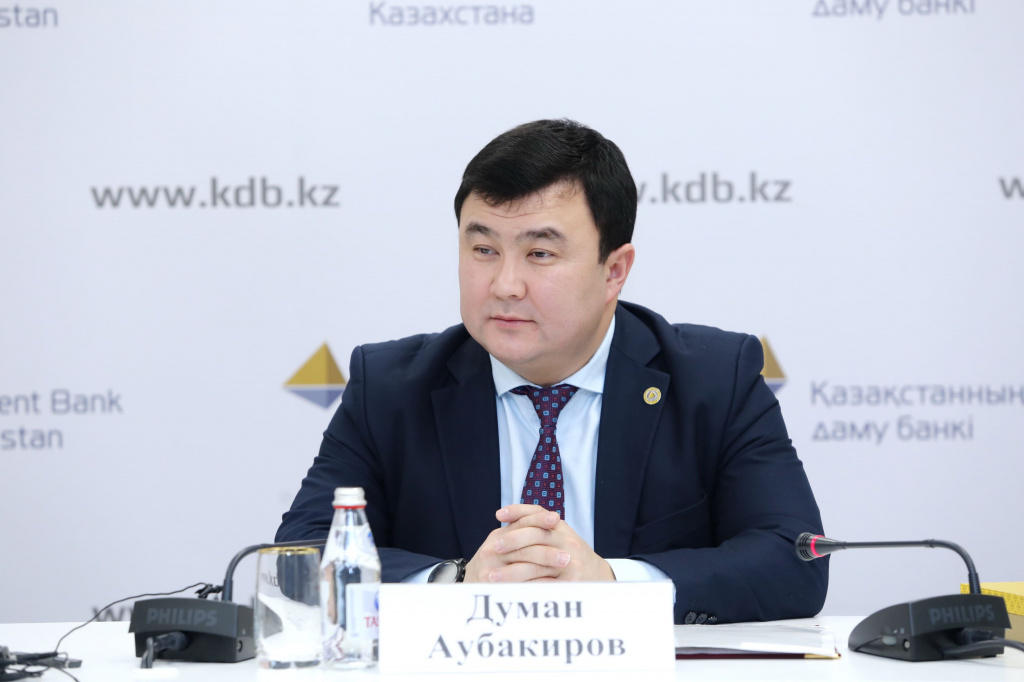 Mechanical engineering is also important area for DBK. In 2020, in this industry, with the participation of the Bank, 2 projects were launched: the construction of a plant for the production of passenger cars LLP "Hyundai Trans Kazakhstan" in Almaty and the development of oil engineering plant LLP "AtyrauNefteMash" in the Atyrau region, in particular, the modernization of workshops for the production of oil service equipment, products grating and hot-dip galvanizing. Both projects were funded under the State Program for Industrial and Innovative Development (SPIID). 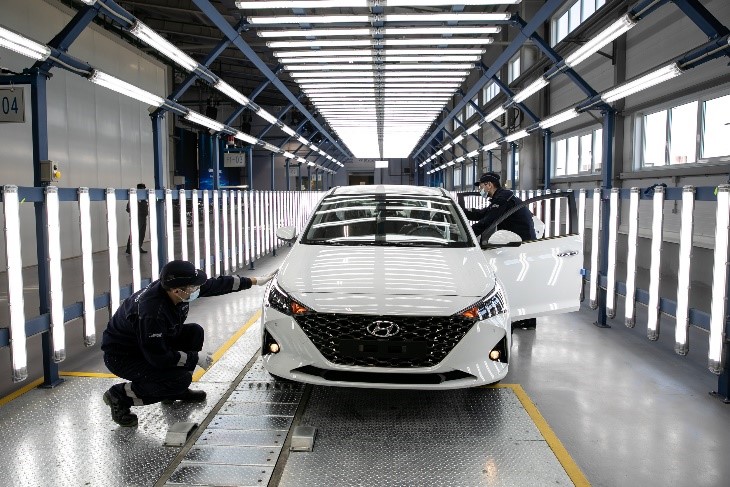 At the same time, the total investment in the construction of a plant for the production of passenger cars under the Hyundai brand amounted to 25.8 billion tenge, Development Bank, in turn, provided a loan in the amount of 12.7 billion tenge for a period of 15 years. The annual capacity of the plant at the first stage is 30 thousand cars, at the second - up to 45 thousand cars. In total, the company will create over 700 new jobs. The cost of the modernization of the AtyrauNefteMash LLP plant, in turn, amounted to more than 14 billion tenge, 9.5 billion tenge of which was provided by DBK. The development of this project made it possible to create additional 80 new jobs for residents of the Atyrau region, in total 350 Kazakhstanis work at the plant. 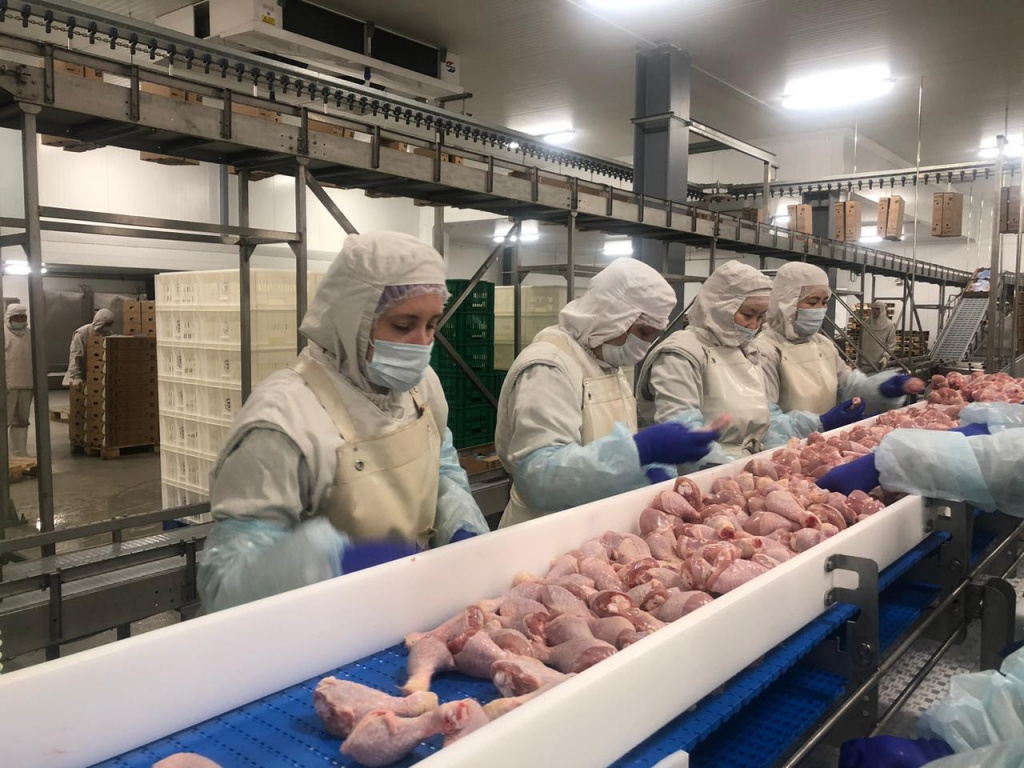 “The construction of the first stage of the Makinsk poultry farm was also financed with the participation of Development Bank, and we are pleased that the project today is a locomotive for the development of the Akmola region's economy. Already, the plant has allowed to invest more than 45 billion tenge in the development of the region, and also increased the average monthly salary in the region by 30%. DBK team believes that the launch of the second stage, which we financed already in 2020, will also be successful and will have a similar positive multiplier effect,” added Duman Aubakirov.

According to the Bank's representatives, projects launched in 2020 are capital-intensive and have a high socio-economic effect. For example, the construction of a multifunctional hotel and tourist complex "Aktau Resort Hotel" in the Mangystau region will serve as impetus for the development of small business in the region. The project created 700 new jobs for the majority of Kazakhstanis from the western region. The cost of the project amounted to more than 68 billion tenge, while DBK's participation was 42 billion tenge in the form of a loan for a period of 20 years. The Bank's financial resources were used for the purchase of equipment and construction and installation works. It is noted that the launch of the complex made it possible to create the only seaside resort in Central Asia, providing a five-star all-inclusive service under the trademark of the recognized world brand Rixos. Financing projects in the field of information and communication is more relevant today than ever. That is why the construction of a hardware and software complex for a communication platform along the railway lines of Transtelecom JSC is key for Development Bank. The project, with a total cost of over 32 billion tenge, was commissioned in February 2020. Development Bank's share was 25.4 billion tenge. Its launch has created more than 190 new jobs.

The construction of a supply gas pipeline to five settlements in the Kordai district of the Zhambyl region, in comparison with other projects financed by Development Bank this year, can be considered one of the inexpensive ones: its total cost was 5.7 billion tenge, and the volume of the loan allocated by DBK for JSC KazTransGas Aimak - 3.5 billion tenge. 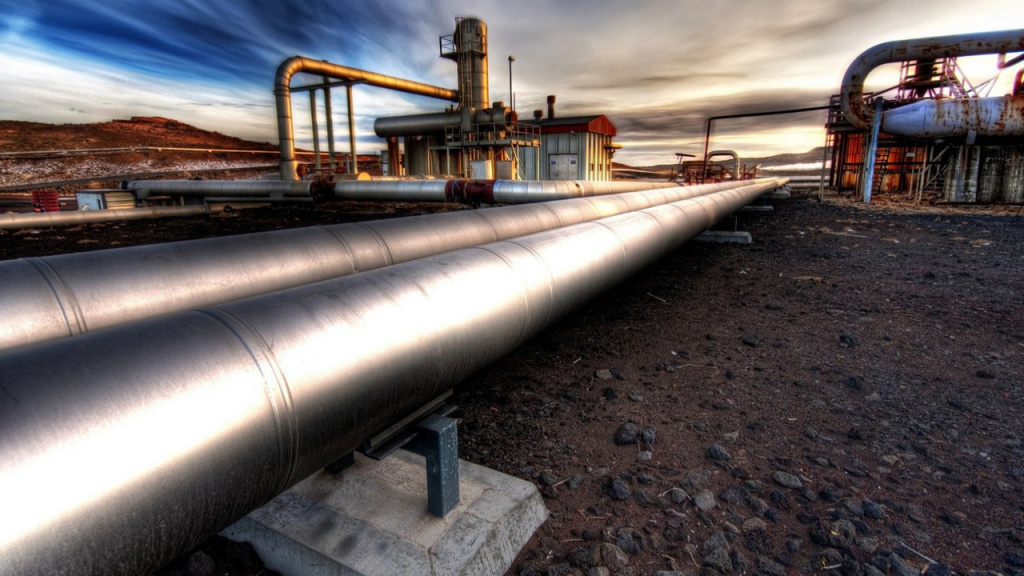 However, according to the Bank's representatives, the project is of colossal social significance for the residents of the region, because its launch allowed more than 5,000 residential buildings, as well as 274 social and business facilities to be connected to natural gas. It is noted that the districts of Masanchi, Karakemer, Sortobe, Bular batyr and Aukhatty will be provided with the very first gas.