Kazakhstan’s economy needs to diversify exports, but the tools for developing an appropriate strategy based on empirical facts remain insufficient. The main question "which industries and commodity niches should be diversified?" still remains open. The Development Bank of Kazakhstan JSC (DBK, the subsidiary of the Baiterek Holding), thanks to the implemented machine learning algorithm identified a list of 50 potentially promising goods, the production and export of which may contribute to the diversification of the country's export basket.

The Economic Complexity Index (ECI) measures the complexity of a country's production structure by combining information about the diversity of its exports and the ubiquity of its products. In 2019, Kazakhstan ranked 78th among 151 countries in the world according to the ECI index, while among the CIS countries we are inferior to Russia, Belarus, Ukraine and Kyrgyzstan.

The main reason for the low level of economic complexity in Kazakhstan is due to its poorly diversified export basket, where products with a revealed comparative advantage are, in most cases, commodities. Today, the domestic economy is in dire need of export diversification, but the tools for developing an appropriate strategy are still inadequate. To solve this problem, the Development Bank implemented a machine learning algorithm to identify promising industries and product niches. Thanks to its implementation, it was possible to identify a list of 50 potentially promising goods, the production and export of which can contribute to the diversification of the country's export basket.

The intuition underlying this algorithm is simple: first, the algorithm looks in which products the country already has comparative advantages, and then recommends other products close to those identified by analyzing the export basket of all countries in the world.

Most of the identified goods belong to the industrial sector structure - 16 units, machinery and equipment - 12 units, chemicals - 8 units and food products - 6 units. 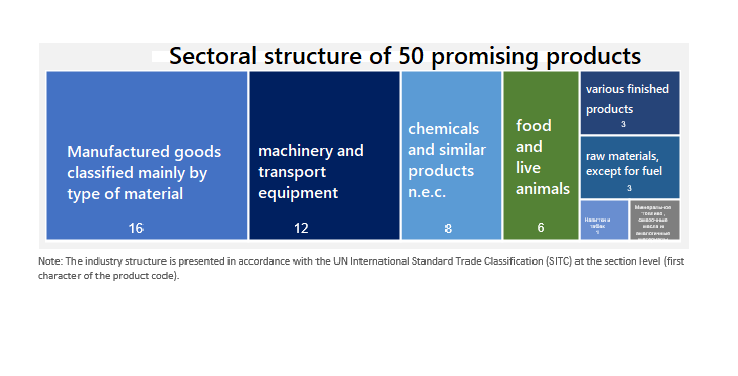 It should be noted that 43 out of 50 identified products have a positive value of the index of product complexity (the index values ​​are in the range from about −4 to +4), which indicates the possibility of not only diversifying the export basket of Kazakhstan, but also increasing its complexity.

The results obtained indicate that the most promising for the economy of Kazakhstan in terms of growing economic complexity are the products of the engineering industry, namely gas turbines, parts for pumps and liquid lifts, fittings, fasteners, equipment for railway tracks, agricultural machines for soil cultivation, electrothermal devices, liquid pumps and lifts, machines for sorting, screening, separating, washing, crushing, grinding, mixing or grinding soil, special vehicles not for the transport of passengers and goods, and machinery for the construction and mining industry. 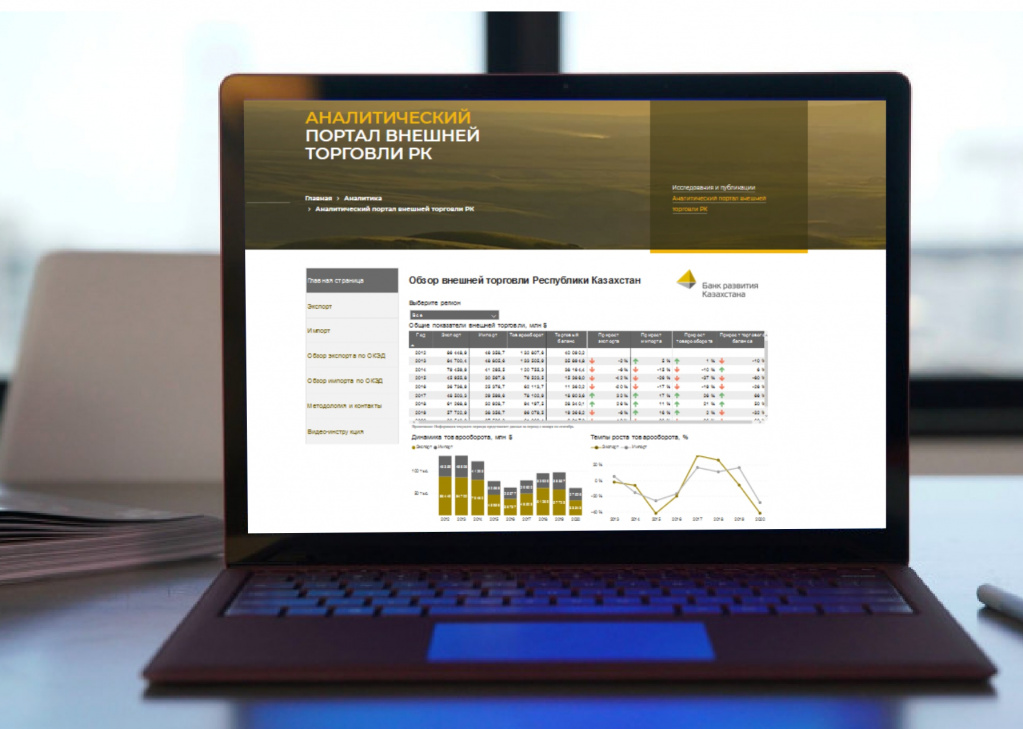 In addition, promising products with a high level of complexity include manufactured goods, such as: ready-made fluids for hydraulic transmissions and antifreeze agents, other plastic plates, sheets, films and strips, textile fabrics or impregnated products, cotton wool, as well as fabrics and products used in machines or installations.

Detailed results of the algorithm are available on the analytical portal "Review of Foreign Trade of the Republic of Kazakhstan" in the section "Algorithm for determining promising industries and product niches" at the following link: https://www.kdb.kz/analytics/analytical-portal-foreign-trade- of-the-RK /, which allows you to get a detailed analysis for each product (in the context of the product complexity of the good potential sales markets with the use of customs duties and distances between countries).

You will find detailed information:

- on the export of the countries of the world in terms of the index of economic complexity;

- for goods for which the countries of the world already have an identified comparative advantage;

- on the competitive environment in foreign export markets for the sale of promising goods and products, in which Kazakhstan already has an identified comparative advantage.

We remind you that the purpose of the Development Bank's portal is to provide potential investors, the business community, the state, national and international development institutions with an accessible and convenient tool for identifying potentially promising industries and product niches. The data published on the portal can play a key role in choosing the production of certain goods on the territory of the Republic of Kazakhstan, the production of which is currently absent or undeveloped.

Additionally, on the official website of the Bank in the Analytics (Research and Publications) section, you can get acquainted with a detailed analytical report on the results of the implementation of the algorithm