The strategic goals of Development Bank of Kazakhstan (DBK) are the development of manufacturing industries and industrial infrastructure. The coronavirus pandemic has made adjustments to many projects. Abay Sarkulov, the Head of DBK, told about how the Development Institute supports its borrowers during the pandemic, about implemented and new projects in an interview with Interfax-Kazakhstan 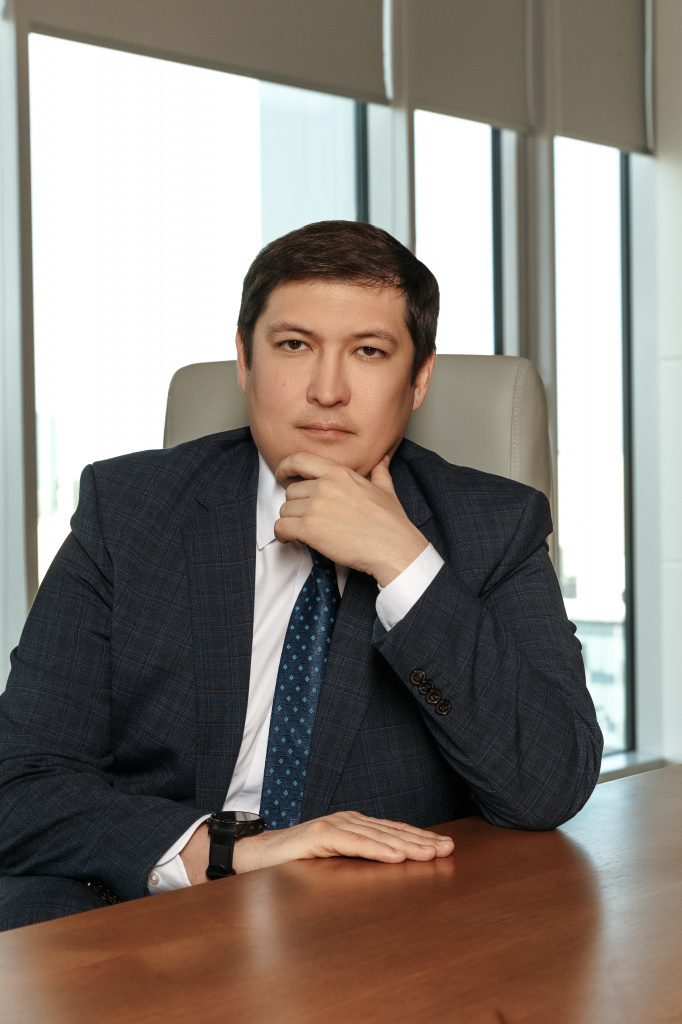 - Thank you for the opportunity to discuss the latest changes in the Development Institute aimed at adaptation to the new conditions, as well as the Bank's upcoming plans. Abay Serikovich, it was previously reported that DBK is restructuring loans to borrowers as part of the anti-crisis plan. What amount is the restructuring planned for?

- In the light of the ongoing changes caused by the pandemic, which also affected some of our borrowers, DBK has developed an Anti-Crisis Plan to support the borrowers and the Bank's financial strength, which is regularly updated to reflect the changes.

For example, the Plan includes such measures as the restructuring of foreign currency loans of the borrowers, which are implemented depending on the availability and receipt of appropriate preferential funding in the national currency.

The total amount required to continue converting the Bank's customer debt is about KZT 114.2 bln., which is 6% of the Bank's loan portfolio (KZT 1.911 tln.).

In addition to converting foreign currency debt, the Bank also provides the borrowers with deferred payments on the principal debt and interest, cancels penalties for late fulfillment of financial and non-financial obligations.

- DBK-Leasing, your subsidiary, provided farmers with the opportunity to purchase domestic agricultural machinery without downpayment. What other anti-crisis measures will be implemented through DBK-Leasing?

- As of today, DBK-Leasing JSC considers on an individual base granting a deferred payment for lease payments in accordance with the requests of lessees. Also, with the Resolution of the Management Board of DBK-Leasing the decision was made not to charge a fee for the period March 15, 2020 to May 31, 2020 for non-fulfillment and/or improper fulfillment of financial and/or non-financial obligations by the counterparties to DBK-Leasing in accordance with the terms of transactions concluded.

- What major projects are planned for implementation in the green economy? Tell us about the most important of them.

- Kazakhstan is currently in the trend of global demand for renewable energy sources (RES). This is evidenced by 90 currently launched power plants in Kazakhstan with the participation of both domestic and foreign investors. Among these projects, there are projects with the participation of DBK, for example: to date, two solar energy projects and one wind farm have been funded and commissioned:

2. Solar Power Station of 100 MW in the area of Kapshagay of Almaty region, the borrower for which is ENEVERSE KUNKUAT LLP. The Bank provided financing in the amount of KZT 10.8 bln.

Both projects are financed by the project financing method within the framework of the Law of the Republic of Kazakhstan "On Project Financing and Securitization". I would also like to note that the international companies are participating in the implementation of these two projects: Universal Energy, represented by Eneverse Kunkuat, its Project Company, and the investor in Zhelga SPP project is DERA GmbH, the German company. Having these projects in the Bank's loan portfolio is a positive signal for foreign investors in "green energy", the Bank may become their experienced and reliable partner.

4. The Bank also approved the financing of "Construction of small hydroelectric power plants in Almaty region" project , the borrower of which is Baskan Power LLP. The project cost is KZT 10.4 bln., the amount of the Bank financing is KZT 7 bln.

If we talk about projects under consideration, at the moment in the field of "green energy" in the pipeline of the Bank there are a number of potential projects in the solar energy sector, as well as projects for the construction of bioelectric power plants.

It should be noted that the Bank started considering renewable energy projects in 2015, almost immediately after the Government of the Republic of Kazakhstan first established long-term fixed tariffs, introduced centralized purchase of electricity from various renewable energy facilities, and after the initiators received the first PPA.

With RES development in Kazakhstan, the Bank together with its clients has also increased its competence. We studied the legislation, began to understand the features of a particular plant, technical nuances depending on the source of generation, location, and equipment used, and compared it with the world experience.

- Will there be continued lending for the purchase of domestically produced cars by Kazakhstan people? How much money is provided for this program this year?

- The program of preferential car loans is in great demand among Kazakhstan people. The Bank has already allocated 6 tranches totaling KZT 82 bln. Besides, in accordance with the Resolution of the Management Board of the National Bank No. 79 dated May 31, 2019, it is planned to allocate funds under the Program in the next three years (until 2023) in the total amount of KZT 60 bln., KZT 20 bln. annually. Lending under the Program is revolving: payments from the repayment of existing loans are directed to the issuance of new loans. Thanks to such re-development of funds, Kazakhstan people purchased on favorable terms 20,629 cars of domestic assembly for a total of KZT 98,219 mln.

- How much money does DBK plan to steer this year into the export operations financing? Is it planned to revise the minimum loan amount of KZT 1 bln. or the financing rate?

- Within the allocated funds (KZT 65 bln. – funds of the National Fund of the Republic of Kazakhstan and KZT 30 bln. – funds raised by DBK at the market rate of interest) for export financing, DBK annually finances export operations in the amount of at least KZT 95 bln., which is planned to be implemented this year also.

Reducing the minimum loan amount for export operations will cause DBK to compete with the financial instruments of second-tier banks, which cannot be considered fair competition, due to the DBK's role as an operator of state programs. Besides, Baiterek system has such subsidiaries as KazakhExport JSC and Damu EDF JSC, whose activities are also related to supporting domestic exports of non-raw materials, by conditionally placing cheap funds in second-tier banks and subsidizing the interest rate. As you understand, as a result of reducing the minimum loan amount, it is possible to impose state financial support in favor of the same subjects in this area.

- Earlier it was reported that the Bank will allocate up to KZT 430.9 bln. for the development of manufacturing industries. What projects are planned for commissioning in the manufacturing sector?

Development Bank continues to maintain a positive trend in dynamics of lending to projects in the manufacturing industry and production infrastructure. The volume of the DBK's loan portfolio in 2019 reached KZT 1,729 bln., having increased by KZT 32.9 bln. or 1.9 % compared to 2018. In 2019, eight projects were put into operation, which provided the opening of 2019 new jobs. These are capital-intensive projects with a multiplier effect on the economy of Kazakhstan, such as High-Tech Ferrosilicon Production Plant in Karaganda, Saryarka Gas Pipeline, Deep Oil Refining Complex at Atyrau Oil Refinery, Nurgisa Solar Power Plant in Kapchagai, Zhylga Solar Power Plant in Turkestan region, the 1st stage of Astana EXPO-2017 Wind Power Plant in Akmola region, and other projects.

As for 2020, of course, the coronavirus pandemic has made its own adjustments to the plans on completion of the investment phases of projects. But despite the state of emergency and closed borders, our borrowers managed to find a solution and continue construction work at an active pace. Now work is being carried out on 14 construction sites, where 6,278 people are involved, and of course all types of protection against coronavirus infection are used. If we talk about sectors of the economy, these are manufacturing and infrastructure projects under SPIID programs, export operations of Nurly Zhol, IBC support for domestic motor manufacturers.

This year, it is planned to commission the facilities of such projects as: The second construction phase of broiler factory in Bulandyn district of Akmola region of Kazakhstan, Development of an oil engineering plant, the second start-up facility of a 50 MW Astana EXPO-2017 Wind Power Plant and others.

The planned value of net profit for 2019 was at the level of KZT 4 bln., while at the end of the year the Bank received a profit of KZT 10.9 bln., due to improving the quality of the loan portfolio and effective liquidity management. However, I would like to emphasize that the Bank is a Development Institution and one of the main strategic roles of the Bank is to finance long-term large-scale projects in the field of industry and industrial infrastructure with a high degree of risk. DBK does not set itself the task of maximizing profits, and one of our tasks is to ensure the Bank's break-even operations.

Within the approved Development Plan of the Bank, the planned value of the net profit indicator for 2020 is about + KZT 4.6 bln. However, it should be noted that in the conditions of current factors (increased credit risk of the Bank's borrowers as a result of the spread of the coronavirus and the weakening of the national currency), the value of the forecast indicators of the Bank's Development Plan for 2020, including the net profit indicator, may be revised by the Bank. At the same time, it is currently too early to talk about specific values, since the economic impact of the global pandemic on the Bank's borrowers and financial indicators in general can only be estimated in advance based on the results of the first half of 2020.

- Thank you for the interview!