Last weekend, the winners of the children's drawing contest took a trip, dedicated to the 20th anniversary of the Development Bank of Kazakhstan. We are happy to share with you the results of our field trip with young talents to the village of Kostomar, in the Arshalyn district of the Akmola region for the green project of CAPEC Green Energy LLP, funded by DBK. 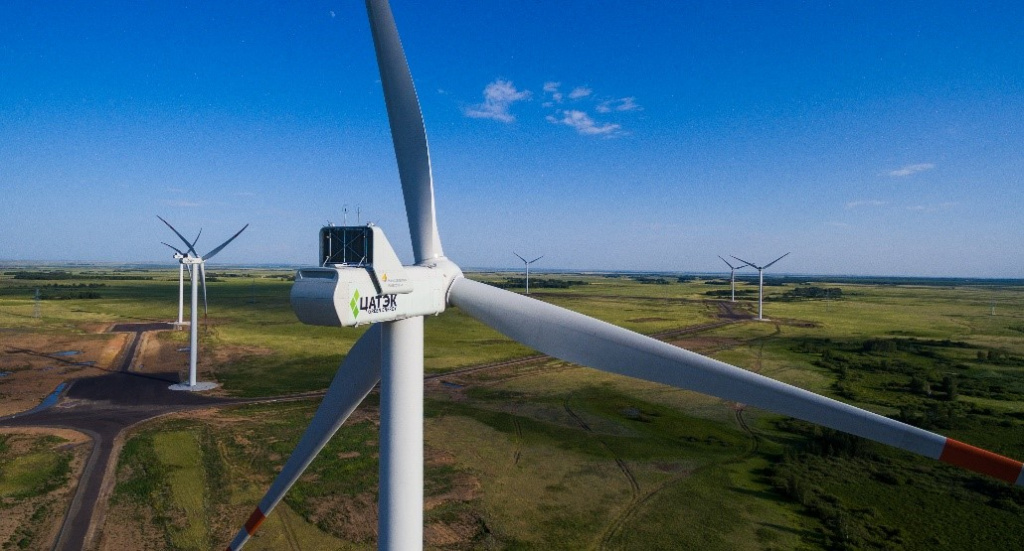 Visit to the unique wind farm "Astana EXPO - 2017", with a capacity of 100 MW, gave children new knowledge, unforgettable impressions, atmosphere of warmth and energy for future prospects. The scale of the wind farm, implemented by the partner DBK, left not only children, but also adults fascinated. 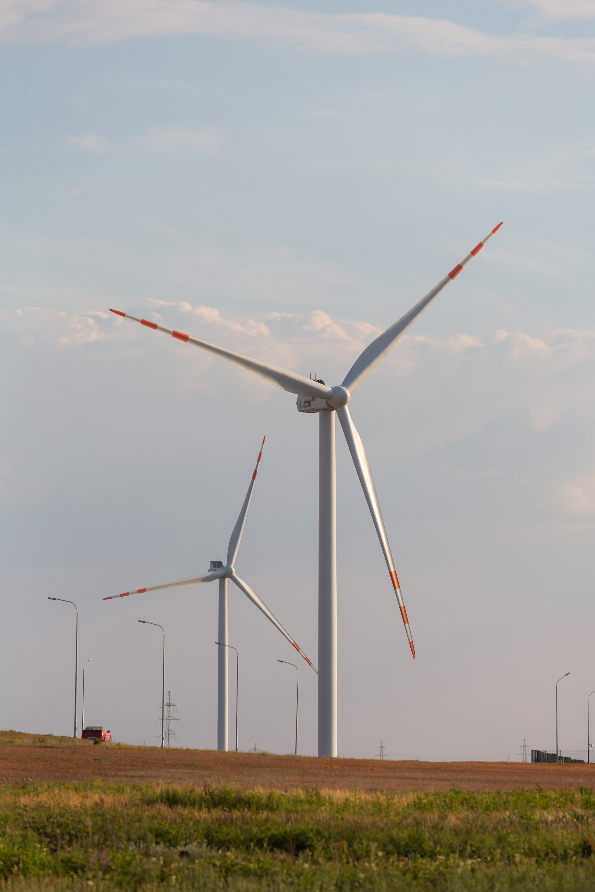 The majestic turbines of the first start-up complex of the wind farm, 84 meters high, and together with the blades - 140 meters, are mesmerizing. The rotor diameter is 112 meters. You can compare their height with a house of 46 floors. In total, there are 29 of them on the territory of the power plant, the unit capacity of each is 3.45 MW. The capacity of the entire project is 100 MW.

Each turbine weighs about 370 tons. In order to lay the foundation for such a majestic structure, the builders had to prepare reinforced concrete foundations, for example, the volume of cement for each turbine foundation required 100 KamAZ concrete mixers. During the installation of the wind turbines, special crane equipment with a lifting capacity of up to 750 tons was used.

As the Deputy Director for Commercial Affairs, Aydar Zholshorinov noted, before the start of the project, about 7 million wind measurements were carried out using the installed meteorological mast within three years. The result of the ambitious project was clean energy, which is generated by the wind farm for the annual energy supply of about 10 thousand households. High-tech wind turbines are produced by one of the world leaders in wind energy - VESTAS. This type of turbine is the latest and most advanced generation of VESTAS equipment and is used in Western European countries, as well as in Canada and the USA, including countries with harsh climatic conditions.

Thanks to the green project, it will be possible to reduce greenhouse gas emissions by 230 thousand tons per year, which exceeds the volume of emissions of more than 113 thousand cars over the same period of time, and save over 79 thousand tons of fuel annually. Even the little ones were impressed by the mathematics of the project.

During the excursion, the children asked different questions, they were interested in everything. The turbine, which stood motionless, became a special object of attention. As it turns out, once a year, each turbine is shut down for 40 hours for routine maintenance. In addition, the participants of the "green" excursion noticed that the course of the gondola changed noticeably during the arrival. Vladislav Garbovskiy, Chief Engineer of CAPEC Green Energy LLP, explained that the gondola, following the direction of the wind, can make several turns in a day. Among other things, young artists were interested in the question: what will happen if the gusts of wind reach above normal? Representatives of CAPEC Green Energy LLP explained that when the wind speed reaches 30 m / s, wind turbines stop working. For this purpose, special wind speed and control sensors are installed on each turbine, which give a signal to stop the wind turbine when the permissible values ​​are exceeded. The children also cared about the environment. For example, one of those present asked a question about birds, namely how safe it is for them. Ruslan Zhampeisov, employee of CAPEC Green Energy LLP, replied that during the entire period of operation not a single bird was harmed. 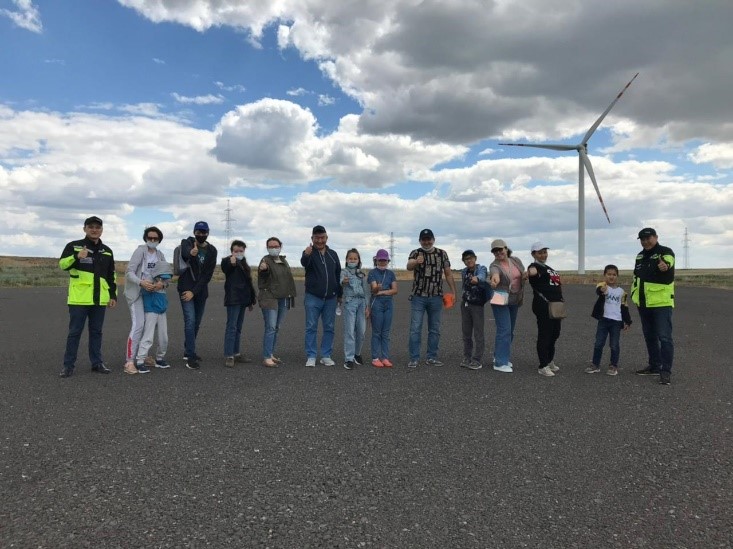 On the territory of the wind station, the participants of the excursion visited the main observation deck, as well as a kind of digital brain of the station - a control center equipped with the latest complex of automatic system for monitoring and controlling the process of electricity production, where all information is received, and also managed to pass into the base of the tower of the wind turbine itself. At the same time, the children were explained that only specially trained and qualified personnel who service wind turbines are allowed to climb into the turbine nacelle. 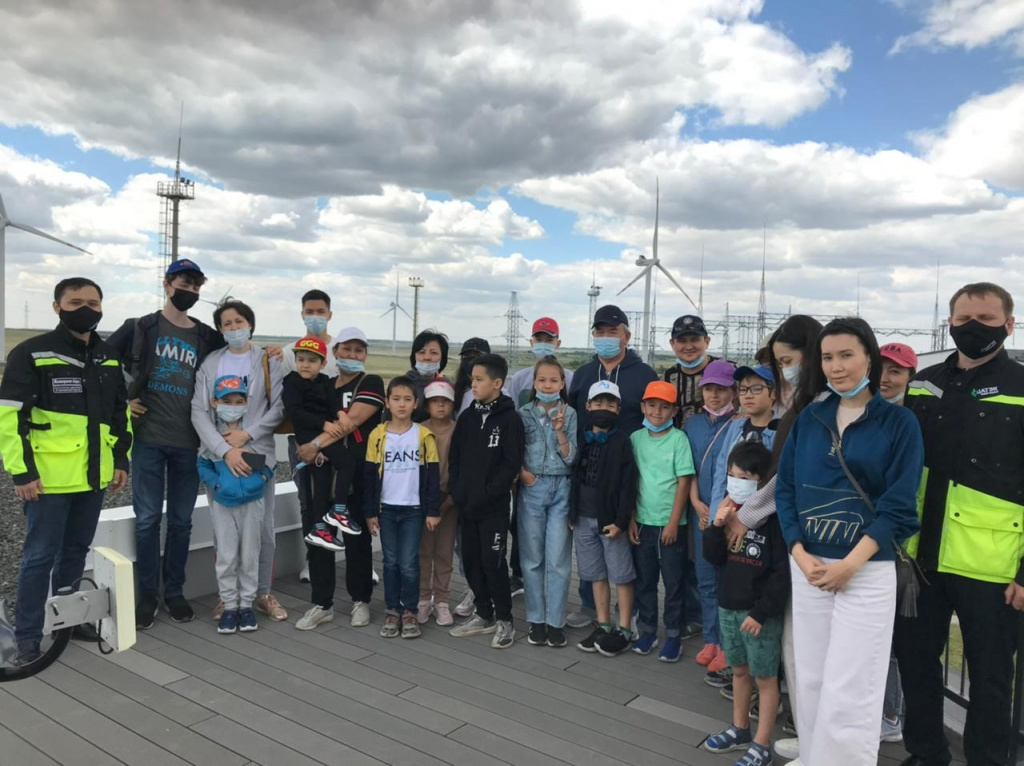 In addition, the participants saw firsthand that such facilities and structures as an overhead power line with a capacity of 220 thousand volts and a total length of about 16 kilometers, highways, more than 25 kilometers connecting turbines , a 220/35/10 kilovolt boost substation with power transformers with a capacity of 80 thousand kilovolt-amperes were built on the territory of the wind farm. It is noteworthy that the station has its own helipad and hotel rooms for service personnel.

The unusual excursion to the strategic facility ended with a delicious tea party, where the guests were deliciously fed and presented with memorable souvenirs. 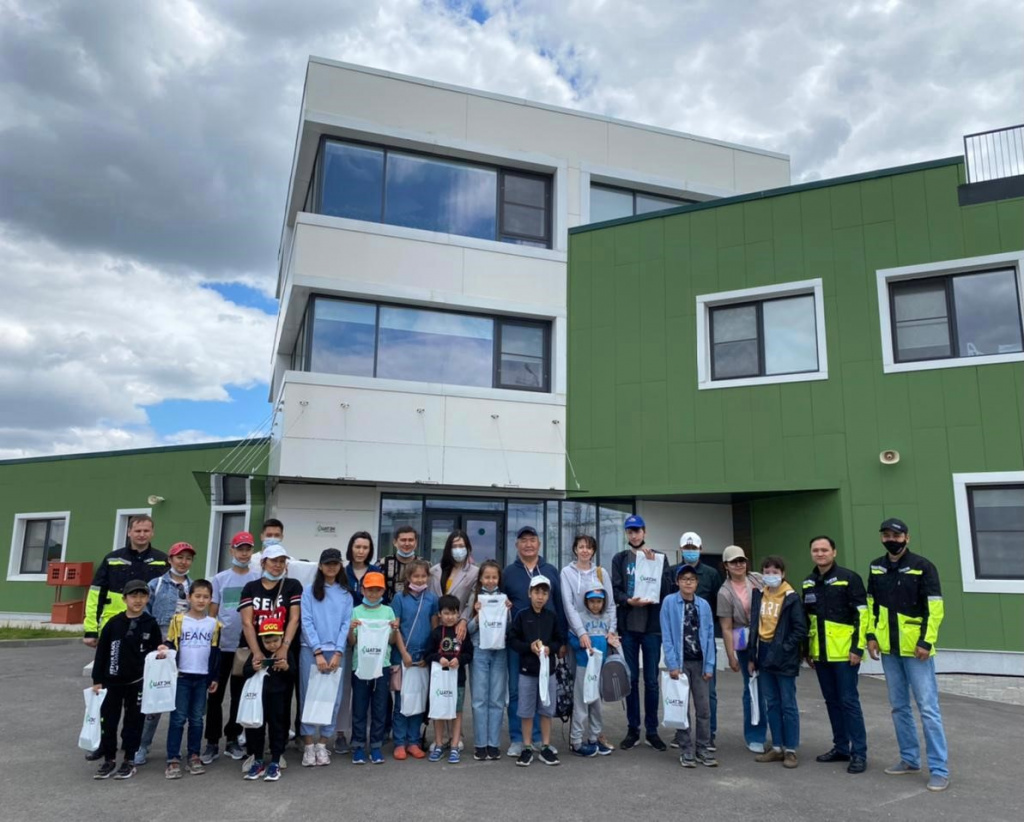 Children, for the sake of whose future such important objects are being built and erected, shared with us their impressions of an unusual field trip.